2013 – Children from the local school in Twardocice spent time cleaning up the Viehweg monument for us!

VIEHWEG MONUMENT — WHAT IT IS AND WHY WE CARE

The original Viehweg Monument dated to 1903

“The Viehweg at Harpersdorf [now Twardocice, Poland] is the burial ground of about two hundred Schwenkfelders who were forbidden Christian burial in the local church cemetery.  Burial in this dumping ground or Potter’s Field was a symbol of disgrace to the families of the deceased.

“Then why were they buried there?  In the post-Reformation period, efforts were made by both the Catholic and Lutheran Churches to compel the Schwenkfelders to become members and to present their children for baptism.  Since they refused they were treated as heretics and severely persecuted.  Refusal of Christian burial was part of the persecution.  Between the years 1720 and 1741, more than two hundred Schwenkfelders were interred there.

“After the migration to America, Rev. Christopher Schultz, in 1772, expressed the hope that the Schwenkfelders would secure this property and convert it into a graveyard with an appropriate monument.

“Rev. Oswald Kadelbach, a friend of the Schwenkfelders, and a resident of that area, was also desirous that the desecration of this tract be prevented as it was considered a public dump.  The local people even came there, gathering loads of soil and exposing the bones of those buried there.

“About ninety years later, in 1861, Dr. Solomon Schultz, who was visiting hospitals in Europe in preparation for his work at the State Hospital in Danville, Pennsylvania, visited Silesia and the Viehweg.  Distressed by what he found, he communicated with Schwenkfelders in America.  Money was raised, the ground was purchased, and an attractive monument was erected in 1863.  The inscription on the monument reads: (English translation)

‘Here rest in God the faithful Schwenkfelders who were buried in this Viehweg between 1720 and 1740.
The descendants in North America erected this monument in memory of their ancestors in Probsthayn, Harpersdorf, Langenneuendorf, and Lauterseifen.’

“Pictures taken during the 1934 pilgrimage showed a well kept area in a grove of birch trees.”

THE WHEELS OF PROGRESS GROUND SLOWLY IN POST-WW II POLAND

A group of Schwenkfelders made a pilgrimage to the Viehweg in 1972 and found the site had not been kept clear of debris and undergrowth.  Soon after, the General Conference requested of U.S. Sen. Richard Schweiker (a Schwenkfelder member) that he help open negotiations with the Polish government to re-establish ownership of the ground upon which the monument sits and a process to maintain the grounds.

Vice Consul Wiedemann of the U.S. Embassy in Warsaw, Poland, was able to determine that the ground had been awarded to a homesteader who was willing to sell a parcel for a price to be determined.  Interestingly, the Germans from the Lutheran Church in Harpersdorf had their cemetery liquidated for a farm cooperative storage yard by the Poles.

Several exchanges of letters took place in 1976 and 1977 between General Conference, Sen. Schweiker, the U.S. Embassy in Poland, and the Polish government with the outcome that foreign organizations could not own land in Poland.  However, the Office for the Protection of the Graves of Foreigners (known as BONGO) could be contacted to initiate restoration of the monument and maintenance of the grounds.  The government could purchase the plot at a much more favorable rate from the homesteader and it would be kept as a graveyard memorial.

Mr. Vincent Nyce; Dr. Claude Schultz, Jr.; Miss Florence Schultz; Rev. Thomas Byron; Dr. Fritz Richter; and Mr. Foster Schultz as members/representatives of the Viehweg Committee scheduled a visit to the office of the BONGO representative in August 1977 to make initial payment for the clearing and upkeep of the grounds.

Twardocice is an agriculture community primarily and people still take an interest in what is happening in the area.  They inquired as to why the Viehweg Monument was being refurbished and what it represented.  We hope they will recognize the significance their area played in Schwenkfelder history and will take an interest in the preservation.

The monument itself suffered destruction during World War II, general deterioration over the years, and became the target of vandalism with carvings and markings destroying it even further.  A few individuals who visited the site in 2001 were able to stimulate interest in restoration.  Their Polish guide contacted a company, Grossular, who performed the renovation.

This was achieved by first using a wash to remove algae and fungus and then the graffiti.  Following that, they patched up the holes and cracks that had been made by bullets and vandals.  The next step was to sharpen the lettering and images that had softened over the ages due to erosion from the rain and snow.  They then carved the elements that had been broken off in the past with matching sandstone and attached them to the proper places on the monument.  Finally, they added gold coloring to accent the lettering and placed a coating over the monument to protect it from early deterioration over the next few years.  The work was completed in December of 2001 while the snow lay on the ground.

The second phase called for the placement of a stone with two flat surfaces in front of the memorial.  The original German script was translated into English (left side) and Polish (right side) inscribed on the two flat surfaces so that visitors to this holy place would be aware of the sacrifices made by those early Schwenkfelders.  The stone carving was completed and placed at the site in the spring of 2002. 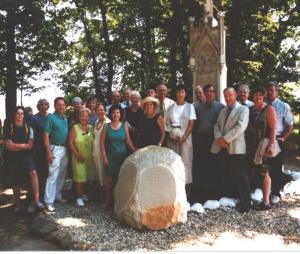 RE-DEDICATION OF THE VIEHWEG MONUMENT, AUGUST 2, 2003
A Schwenkfelder Homelands tour was organized for August 2003 with the main purpose being to re-dedicate the Viehweg Monument.  On Saturday, August 2, buses arrived in Twardocice, greetings were exchanged, and some got their first look at a village they had heard so much about.  A busload of former German inhabits (some from that village prior to World War II) arrived.  The local people had decked out the former hotel with a welcome sign over the door where a reception was held after the re-dedication service.  The service began near the remains of the former Harpersdorf Refuge Lutheran Church with the local mayor welcoming everyone and the local priest issuing greetings, everything being translated into German or English as they spoke each phrase.  Afterwards, the group marched up the path across from the former Refuge Church with the clerics leading the procession and five German trombonists providing music.  After assembling around the monument, a re-dedication service was conducted.

Rev. Karen Gallagher visibly impressed the local people when she greeted them in their native Polish language and followed suit with the Germans in their language.  Drake Williams, Jr., offered an English translation of a prayer by Caspar Schwenckfeld.  Pastor Cesar Krolowicz and Dr. Paul Eberlein offered their appreciation of the collective effort and Wolfgang Knörrlich contributed his thoughts.  Dr. Howard Kriebel and Norris Anders placed a large wreath at the foot of the monument and the German contingency gave us a bronze plaque commemorating the service, which is now mounted on a column on the ground floor in the Heritage Gallery of the Schwenkfelder Library & Heritage Center.

WHAT IS HAPPENING TODAY AND WHAT YOU CAN DO
The monument, however, needs regular care because of the material from which it is made and the micro-climate conditions where it is located.  It was hoped that the government of Pielgrzymka which is responsible for the community would have the resources to provide this care and upkeep.  However, this is proving not to be the case.

Throughout the year 2013, we marked the 150th anniversary of the placing of the Viehweg Monument in Harpersdorf, Germany – now Twardocice, Poland.  The Viehweg Committee is hoping to raise $15,000 through 100 donations of $150 to provide the immediate and long-term professional maintenance required so we can fulfill our memorial responsibility to our forebears buried on these now sacred grounds.   Meanwhile, a monument restoration firm in Poland has been contracted to clean and treat the monument.

We are pleased to announce that our fund-raising efforts are underway and a very enthusiastic “Thank you!” goes out to those who have contributed to these efforts.  Gifts are still being received.  If you would like to support this project, send your check, clearly marked “Viehweg Project,” and payable to:

If you wish further information, please write to the address above.